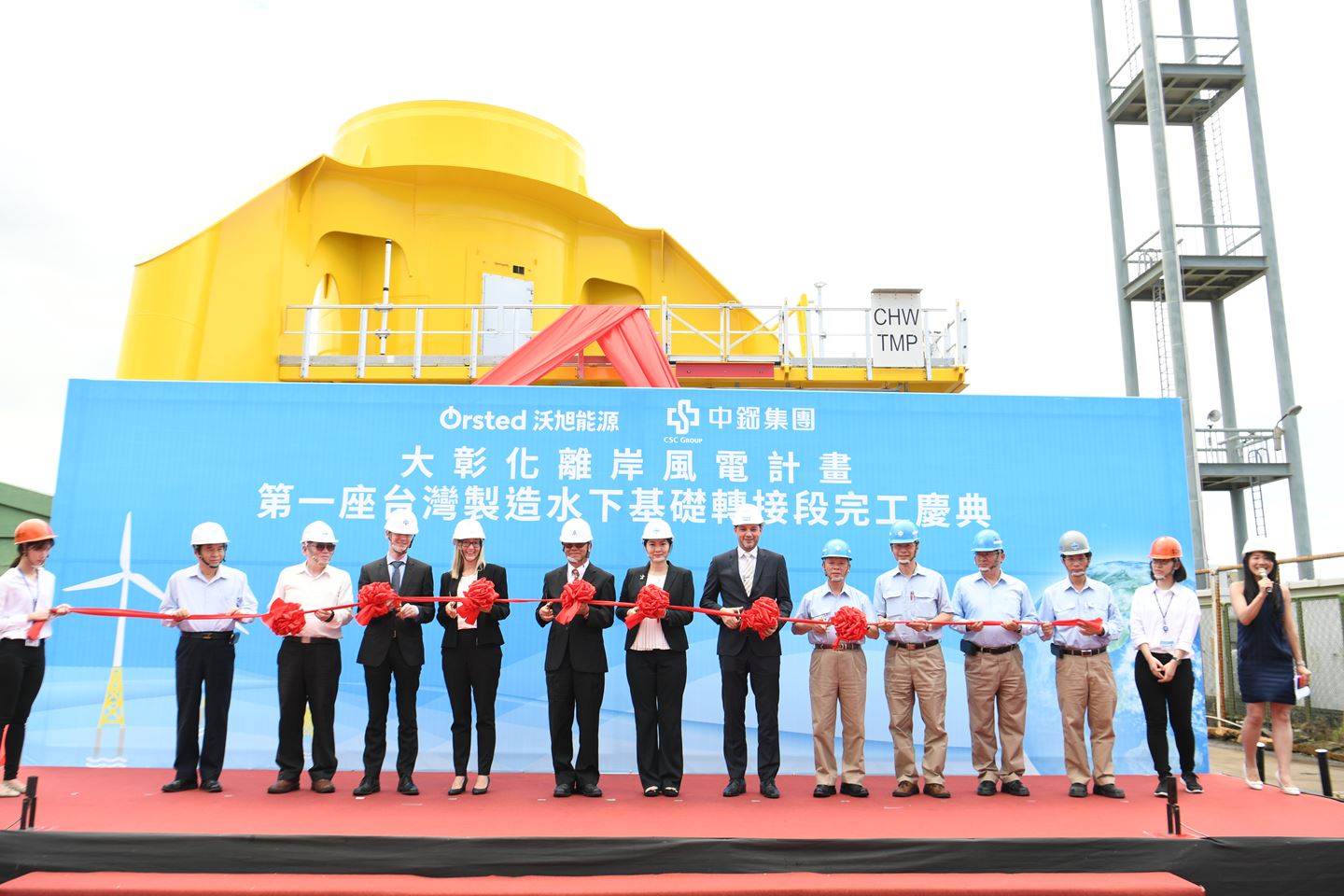 Global offshore wind leader Ørsted today celebrated the completion of the first made-in-Taiwan transition piece mock-up with Sing Da Marine Structure (SDMS), a wholly-owned subsidiary of China Steel Corporation. The mock-up, fabricated by SDMS in Kaohsiung, has demonstrated that local suppliers are on track to prepare for delivery of jacket foundations for Ørsted’s Greater Changhua 1&2a projects.

The ceremony was attended by officials from Ministry of Economic Affairs and Kaohsiung City Government, local stakeholders, SDMS and their 20 local sub-suppliers, and the Ørsted team. It was a great opportunity to witness an important milestone in building offshore wind in Taiwan, as well as a significant proof for Kaohsiung’s steel industry to be well positioned in local offshore wind supply chain.

Over a period of more than 3 years, Ørsted has always been in the frontline to drive local supply chain development in Taiwan and support local suppliers to elevate their capabilities. The dedicated collaboration between Ørsted and China Steel Corporation started in 2017. Ørsted signed a contract for SDMS to supply 56 jacket foundations in November 2018. This is Ørsted’s largest jacket foundation contract ever. With the technical support and knowledge transfer from Ørsted, SDMS now completed the manufacturing of Taiwan’s first transition piece mock-up.

Ørsted’s Greater Changhua 1&2a projects will inject new vitality into Kaohsiung’s traditional steel industry. This expected that the project will  create around 2,000 job opportunities in Kaohsiung. SDMS is extending its manufacturing facilities in Sing Da Harbour in Kaohsiung and the new factory will be operational in the first quarter of 2020. Around 20 local steel suppliers will work with SDMS to deliver the Ørsted contract, which will stimulate the transition and upgrading of Kaohsiung’s local steel industry and lead to greater economic prosperity in Southern Taiwan.

Matthias Bausenwein, President of Ørsted Asia Pacific, said: “We are pleased to see the completion of the first jacket foundation transition piece mock-up. The important milestone demonstrates the strong collaboration between Ørsted and CSC/SDMS. The manufacturing of complicated jacket foundations requires superb technical capabilities. The construction of those over 1,000 tons heavy foundations not only accelerates the upgrade of Kaohsiung's steel manufacturing, but also drives investment in related industrial chains, increases employment and invigorates overall economic development all across Taiwan. Ørsted will work seamlessly with local suppliers and stakeholders to continue upgrading the traditional steel industry, with the growth of offshore wind as main driving force.”

To support SDMS delivery of the jacket foundations, Ørsted’s experts are stationed in Kaohsiung at a dedicated office during the Greater Changhua 1&2 a construction preparation phase. Ørsted will also hire around 10 new positions locally over the next months to assist local production in meeting global standards.