Ørsted and the World Wide Fund for Nature (WWF Denmark) are testing how 3D-printed reefs can benefit biodiversity in the Kattegat, a strait between Denmark and Sweden, which is experiencing a historically low cod stock. This is the first time 3D-printed reefs are used in Danish waters, and they will complement existing boulder reefs that Ørsted established when constructing the Anholt Offshore Wind Farm in 2012-13. 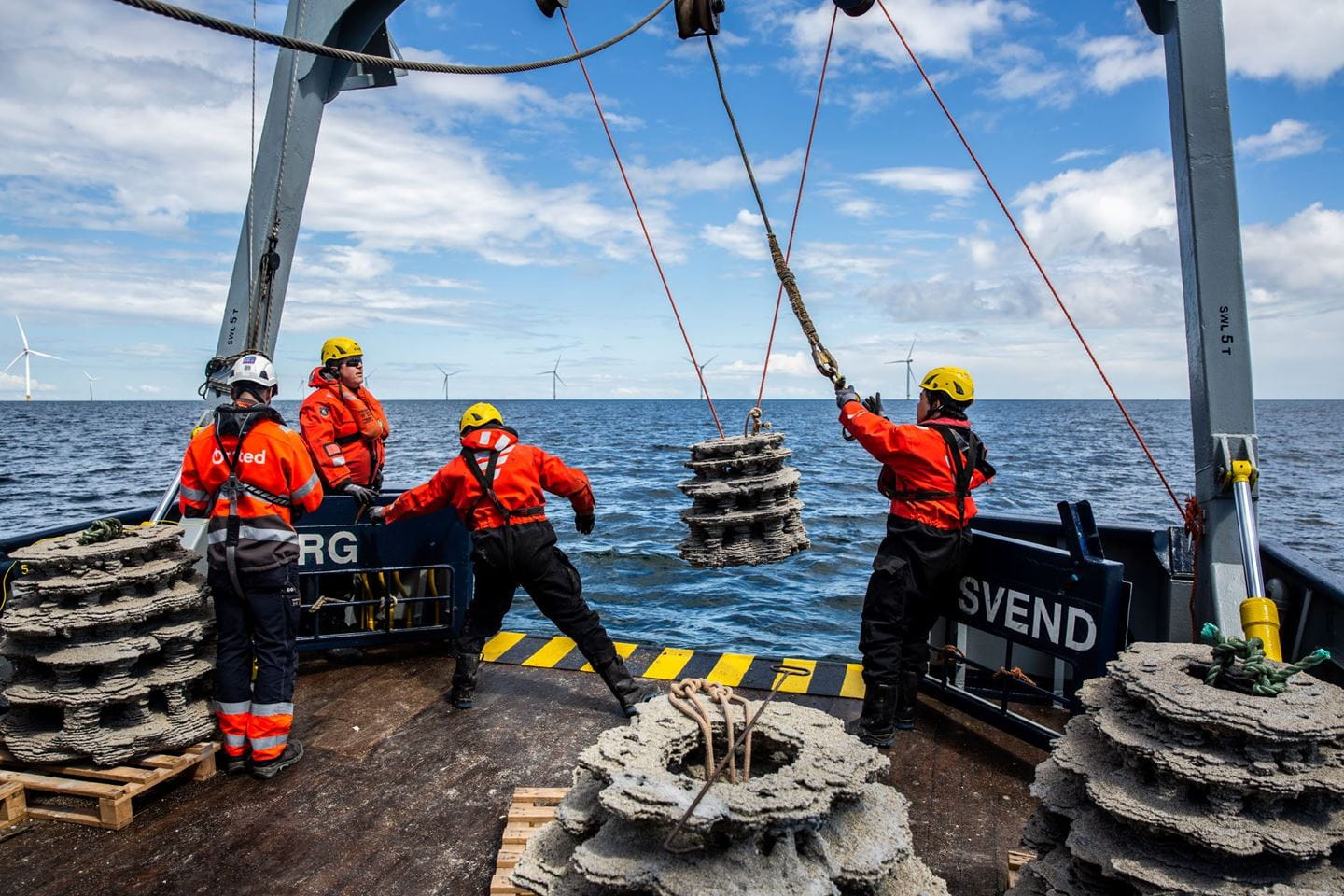 Ørsted and WWF have deployed 12 3D-printed reef structures on the seabed between the wind turbines at Anholt Offshore Wind Farm in the Kattegat, which is part of the Greater North Sea ecosystem. Among other things, overfishing, increasing oxygen depletion, and habitat loss have resulted in a decline of the cod stock in the Kattegat for the past 20 years. It is now alarmingly low. This creates a negative domino effect in the Kattegat ecosystem, impacting biodiversity and the marine ecosystem’s resilience against climate-driven changes.

The two partners behind the project hope that it will have positive effects on the Kattegat cod stock and in turn contribute to a healthier, more resilient marine ecosystem with improved biodiversity.

Filip Engel, Vice President of Sustainability at Ørsted, said:
”The ocean holds vast potential to help meet our climate goals. Improving ocean health and restoring marine biodiversity is fundamental to addressing biodiversity loss and the climate crisis. As governments around the world are ramping up ambitious plans to grow renewable energy capacity, offshore wind will take up more space. At Ørsted, we believe action on climate and nature can and must go hand-in-hand, and this exciting project together with WWF Denmark is one of many we’re testing out globally to seek the best solutions to make our ambition of a net-positive biodiversity impact a reality.”

Bo Øksnebjerg, Secretary General, WWF Denmark, said:
”Marine biodiversity in Denmark is under heavy pressure, and today there are 90 % fewer cod in the Kattegat than in 1990. Action is needed – and urgently. We must give nature and wildlife a hand, while trying to solve our climate crisis by expanding our renewable energy production at the same time. To solve the nature crisis, we must leave nature in better shape than before. That’s why we’re very excited that we, together with Ørsted, can test the new, unique 3D-printed reef structures here in Denmark for the first time.”

Why cod is important for ocean biodiversity and the climate
In recent decades, attention has been drawn to the fact that the extensive overconsumption of marine resources has had enormous consequences. Globally, these consequences include dwindling fish stocks, oxygen depletion near the seabed, and a loss of habitats for marine life, such as massive reduction of eelgrass meadows.

Cod is an important top predator, meaning it preys on other marine species and thereby contributes greatly to maintaining the balance in the marine ecosystem. When cod gets greatly reduced in numbers, the abundance of their prey – such as the green crab – will grow. As a result, seagrasses decline because the crabs eat both the seeds of the eelgrass and many of the snails that themselves keep the eelgrass free from being overgrown with algae.

This is a problem, as eelgrass is itself of great importance for both biodiversity and the climate. It provides important habitats for marine life, such as juvenile fish, it produces oxygen, and it stabilises the seabed. Crucially, eelgrass also very effectively stores carbon in its root network, preventing it from ending up in the atmosphere and contributing to the global temperature rise.

Biohuts provide shelter for cod in coastal waters
Last year, WWF Denmark and Ørsted installed biohuts at the piers in the port of Grenaa in collaboration with the Port of Grenaa and the Kattegat Centre. Together, the two projects offer new habitats for cod at key stages in their life cycle.

Biohuts can be described as fish kindergartens as they provide vital protection to small fish. Here, e.g. juvenile cod can seek shelter and food until they are large enough to swim out into deeper water.

3D-printed reefs help cod offshore
The 3D-printed reefs look like a wedding cake consisting of several levels that are connected to each other by hollows where fish can swim in and out of hiding places. At the same time, the structures themselves will provide surfaces and crevices where other organisms can attach. The reefs are about one cubic meter big and vary in width and weight to best imitate natural habitats and weigh up to half a ton.

Ørsted has seen how the boulder reefs that the company established when constructing the Anholt Offshore Wind Farm have become attractive oases for other marine species on an otherwise barren seabed. The expectation is that the new 3D-printed reefs can complement the stone reefs and will quickly become inhabited with life. WWF already has experience with 3D-printed reefs from a project in the Dutch part of the North Sea.

The project at Anholt Offshore Wind Farm is supported by PensionDanmark and PKA A/S which have a 30 % and 20 % share in the wind farm, respectively.

Torben Möger Pedersen, CEO at PensionDanmark, says:
”We’re very proud to see Anholt Offshore Wind Farm pioneer 3D-printed reefs in Danish waters. Biodiversity is a focal point for PensionDanmark, and if this innovative initiative can improve biodiversity in the marine ecosystem, while the wind farm is producing sustainable power, we have a win-win situation for all concerned.”

Jon Johnson, CEO of PKA A/S, says:
”Protecting our planet and working towards a sustainable future is important to us. Biodiversity is decreasing worldwide at an alarming rate. We’re proud to support the test of artificial reefs at the Anholt Offshore Wind Farm and its attempt to improve conditions for cod and the wider biodiversity in the area and the Kattegat. We’re looking forward to following the development of marine life conditions in the coming years.”

Ørsted has set the ambition to create a net-positive biodiversity impact for all new renewable energy projects commissioned from 2030. Ørsted is working together with several ecology experts on different projects to restore and enhance biodiversity – such as Dutch ARK Nature in a pioneer project in the North Sea – and with two local wildlife trusts in a flagship project on the Humber estuary on the east coast of Northern England. The company also recently announced ReCoral by ØrstedTM, a world-first attempt at supporting coral reefs by growing corals on offshore wind turbine foundations in Taiwan.

The project is part of a strategic partnership between Ørsted and WWF Denmark initiated in 2018. Its purpose has been to contribute to save the world’s climate-threatened wildlife and nature, while also engaging the Danish population in solutions to global warming and creating a society that runs solely on green energy.

Media kit
Pictures from the deployment of the 3D-printed reefs at Anholt Offshore Wind Farm are available for download and editorial use here. Please credit Ørsted. A video about the reefs is available on YouTube.

About WWF Denmark
WWF is one of the world's largest and most influential organizations with more than five million supporters globally. WWF has offices in more than 80 countries and 1.200 projects all over the world. WWF's mission is to stop the destruction of Earth's natural environment and create a future, where people live in harmony with nature. WWF Verdensnaturfonden is the Danish equivalent of the World Wild Fund for Nature.

About Ørsted
The Ørsted vision is a world that runs entirely on green energy. Ørsted develops, constructs, and operates offshore and onshore wind farms, solar farms, energy storage facilities, renewable hydrogen and green fuels facilities, and bioenergy plants. Moreover, Ørsted provides energy products to its customers. Ørsted is the only energy company in the world with a science-based net-zero emissions target as validated by the Science Based Targets initiative (SBTi). Ørsted ranks as the world’s most sustainable energy company in Corporate Knights' 2022 index of the Global 100 most sustainable corporations in the world and is recognised on the CDP Climate Change A List as a global leader on climate action. Headquartered in Denmark, Ørsted employs 7,016 people. Ørsted's shares are listed on Nasdaq Copenhagen (Orsted). In 2021, the group's revenue was DKK 77.7 billion (EUR 10.4 billion). Visit orsted.com or follow us on Facebook, LinkedIn, Instagram, and Twitter.