DONG Energy has today (16 August) welcomed the decision of the Secretary of State for Energy to grant development consent for the Hornsea Project Two offshore wind farm, located 89 kilometres off the Yorkshire coast. 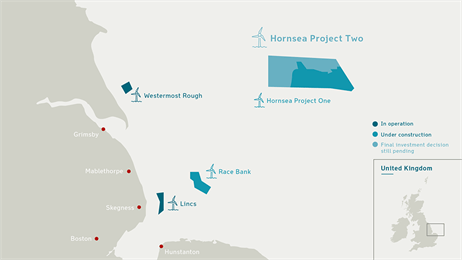 Hornsea Project Two will have a capacity of up to 1.8 gigawatts (GW) and will consist of up to 300 turbines. It could meet the electricity needs of approximately 1.6 million UK homes per year.
Hornsea Project Two is being developed by SMartWind, owned by DONG Energy.

The Development Consent Order (DCO) was approved by Greg Clark MP at the recommendation of the Planning Inspectorate, and covers the entire project including the turbines, foundations, offshore and onshore substations, array cables and export cables.
Brent Cheshire, DONG Energy’s UK Country Chairman, said:
“Development consent for Hornsea Project Two is very welcome. We have already invested £6 billion in the UK, and Hornsea Project Two provides us with another exciting development opportunity in offshore wind.

“Hornsea Project Two is a huge potential infrastructure project which could provide enough green energy to power 1.6 million UK homes. A project of this size will help in our efforts to continue reducing the cost of electricity from offshore wind and shows our commitment to investing in the UK.”

Huub den Rooijen, Director of Energy, Minerals and Infrastructure at The Crown Estate, said:
“Offshore wind is already on course to meet 10% of the UK’s electricity demand by 2020. Major developments of Hornsea Project Two’s scale will pave the way for its continued growth alongside driving down costs, creating high value jobs, and supporting the UK’s transition to a low carbon energy supply.”
DONG Energy will now review the details of the DCO.