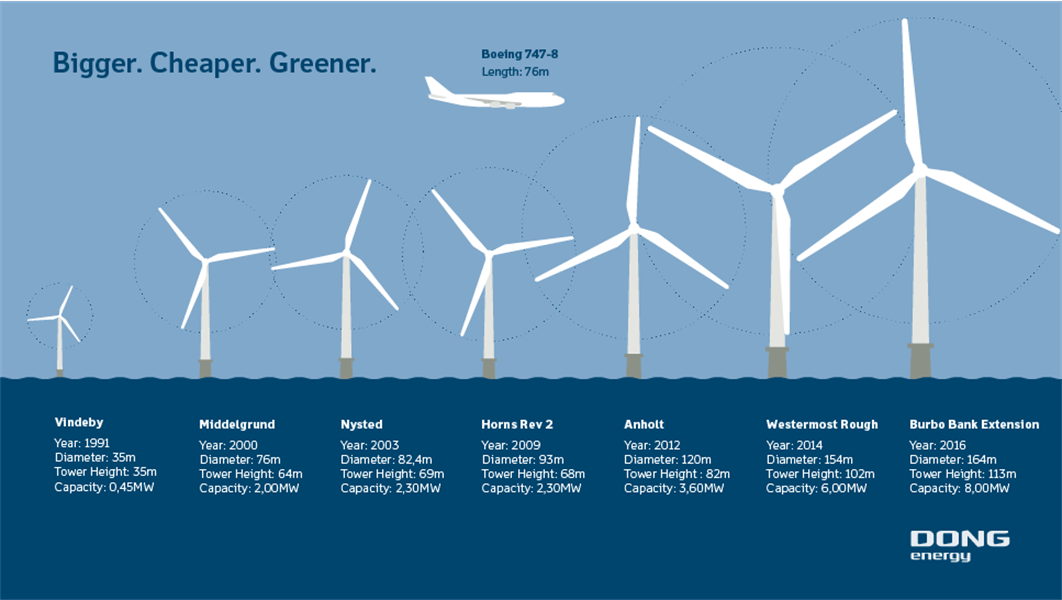 Offshore wind capacity recently marked a milestone when DONG Energy commissioned offshore wind turbine number 1,000. It happened at the German offshore wind farm Gode Wind 2, which is one of the many wind farms that DONG Energy fully or partly owns and operates in Denmark, the UK and Germany.

From a niche technology to a reliable energy source


Developments have been moving forward at a rapid pace since the first Danish offshore wind turbine with a capacity of 0.45MW started producing power 25 years ago at the offshore wind farm Vindeby. Today, each of the largest wind turbines in the market – with a rotor span of 164 metres and a capacity of 8MW – can produce almost twice as much energy as all 11 of the small wind turbines that make up the Vindeby Offshore Wind Farm. In fact, just one rotation of the largest wind turbines produces electricity to cover one household's power consumption over 29 hours.

"In the space of only a few years, offshore wind has evolved from being a niche technology to being recognised as a reliable and clean energy source supplying power on utility scale and playing an important role in the green transformation of the energy sector. With 1,000 offshore wind turbines, we have a unique level of experience and routine at constructing and operating ‘power plants’ at sea, and this is crucial to ensuring that we can continue to reduce the costs of green electricity from offshore wind," says Senior Vice President Anders Lindberg, who is responsible for the construction of offshore wind farms at DONG Energy.


Wind farms in operation and under way